How do I use the "zoom" map on a mobile?

What do the map symbols mean?

What do the colours mean?

The choice of colours is entirely arbitrary, but I thought that they helped distinguish the vessel types. The colours are derived from the AIS type information which only vaguely defines categories, so a RO-RO ferry might appear as a cargo carrying passenger vessel or a passenger carrying cargo vessel.

Automatic Identification System is a collision avoidance system for ships. As part of the global maritime safety system, ships over 300 gt are now required to broadcast their positions, speed and direction to other vessels in the area. The AIS data is collected by enthusiasts using a special VHF receiver and uploaded to ShipAIS.

Why does the background map look weird?

Many existing maps only cover the land and not the sea, so I've had to generate my own with the following considerations:

How to contribute AIS data?

The 'forward data from server 1 to server 2' box should not be ticked if you are sharing with the COAA server. Please only upload your own AIS data to AISLiverpool. 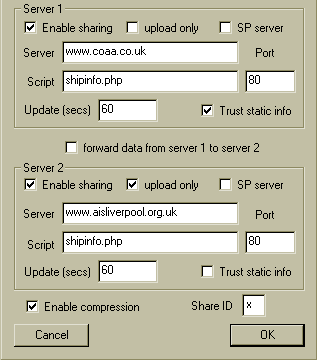 If you are not using ShipPlotter, you can also upload unprocessed AIS data to

Is this the same ShipAIS.com?

Yes, only the "frontend" has changed. All the AIS data, AIS contributors, photos and forum are still the same. 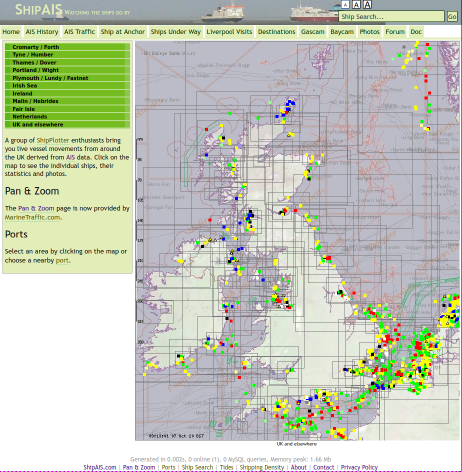 I wrote the original site back in 2005 and maintaining it has gradually got more and more complicated. Much of the technology has changed since then and trying to get the code to run on a new server would be a lot of work and a lot more expense. Instead, I have spent my time working on a new look website that works on both desktop and mobiles and should be easier to maintain.

As you may have guessed, I'm not a graphics designer so the layout may be too small on some devices or too big on others. If you have suggestions for better layout, colours, text, etc or find things that don't work then either contact me or post them on the forum. I'm also happy to have ideas of things you would like to see on the website or ways to help people find their way around.

I preferred the old ShipAIS.com!

Unfortunately the upgrade was forced on me by my (ex)hosting company. They refused to support the ageing hardware the website was running on and shut it down several times citing "security" issues, but refused to give me any details or evidence.

Ideally I would have moved the website to a new hosting company, but much has changed since I wrote it in 2005 (before mobiles!) and significant parts of the code no longer work (mainly database queries). Also, in order to get ShipAIS to run on modest hardware, there are several difference caching mechanisms to reduce the load on the server.

So I was looking at a significant rewrite of old code and re-implementing the caching servers, or starting afresh using modern frameworks. I used the Covid19 lockdown of 2020 to write a new website.

For those who have problems with the new website, I apologise. The website is written as a hobby by a single person so I could only do limited testing before launching the site, but I am trying to improve it.

The following updates were added on 1st November 2020